The Whig Club: Judge and Jury in Baltimore

It was a cold morning when Melchior Keener got word to leave Baltimore or suffer the vengeance of the Whig Club. At nine o’clock on December 5, 1776, James Cox, a popular local tailor, delivered the message that Keener had three days to settle his business and flee the city. The Whig Club had branded him a traitor to the revolutionary cause and an enemy of the country. 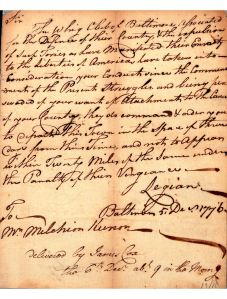 Keener was not the first loyalist to be threatened by the Whig Club. The evening before, on December 4, the Tory sheriff of Baltimore County, Robert Christie Jr., received a similar message. He was ordered to leave Maryland or else his life would be “sacrificed by an injured people.”[1] He and another accused loyalist, Hugh Scott, rode to Grant’s Tavern that night to meet with the Whig Club and appeal their sentences. Christie recognized nearly twenty of the men assembled at the tavern, but they granted no quarter to the accused. Christie and Scott were compelled to leave Baltimore on horseback that same night.

The Whig Club was an extralegal organization that was made up of Baltimoreans from a variety of backgrounds. The club members were lawyers, sailors, mechanics, doctors, a schoolmaster, artisans and merchants, but they all advocated a radical path of revolution. Many of these men fought for their convictions and some were part of the Maryland Line in 1776. Captain Nathaniel Ramsay, his 2nd Lieutenant David Plunkett, and Captain Samuel Smith were all members.[2]

The club sought to protect the revolutionary cause by targeting “secret and disguised enemies,” particularly those wealthy and well-connected “dignified Tories”– like Melchior Keener– who could elude persecution from the more moderate state authorities in Annapolis. Colonial networks of power and protection were breaking down in Baltimore and the Whig Club’s influence was growing. The actual business of the club was rooting out loyalists. Any member could have called a meeting and condemned Melchior Keener as an “enemy to America.” If most of the club agreed to pursue the case,  then the president of the club would have set a date for Keener’s trial. The defendant would ostensibly have been invited to the trial to mount his own defense, but none of the targets of the Whig Club mention such an invitation. If two thirds of the members were persuaded that the defendant was a traitor to the cause, he would be declared guilty and banished from the state. [3]

Melchior Keener was not accustomed to being pushed around. He was a wealthy merchant and a leading citizen of Baltimore, having collaborated with a number of Whig Club members in the establishment of the Baltimore market house. Before the war started he had also been the president of the Baltimore Mechanical Company, an organization that oversaw internal Baltimore affairs, trained the militia, and acted as a training ground for craftsmen to enter public service. Membership in the Whig Club and the Mechanical Company often overlapped– dual members included James Cox and Cornelius Garritson, both tailors, David Poe, an Irish wheelwright turned soldier, and Thomas Morgan, a watch maker.[4]

However, status did not afford the protection it used to in Baltimore and Melchior Keener was alarmed by the letter. By December 9 the Whig Club believed that he had left the county. He applied to the club for permission to return to Baltimore for an additional week to settle his affairs there. They granted his request, on the condition that he turn in his “warlike arms and ammunition” to one of their representatives.[5]

Melchior Keener appears to have fulfilled the Whig Club’s demands, but he also turned to the more moderate state leadership in Annapolis for help. He couldn’t trust the Committee of Observation in Baltimore, which tolerated, if not approved of, the Whig Club’s actions.

The state government had an uneasy relationship with organizations like the Whig Club. Although the club supported the Revolution, its threats undermined the authority of state legislators by putting political power and judicial authority in the hands of unelected club members who had harnessed popular violence.  On December 13, the Council of Safety in Annapolis addressed the “alarming nature” of the note. They condemned the Whig Club, stating that its actions would “manifestly introduce anarchy and a total end of all regular government.”[6] However, the censure of the Council of Safety would not bring an end to the Whig Club’s activities until the spring of 1777, when printer William Goddard’s rhetorical battles with the Whig Club turned violent and the Whig dominated militas refused to come to Goddard’s aid against the mob. On April 17, Governor Thomas Johnson declared “all bodies of men associating together… for the purpose of usurping any of the powers of government, and presuming to exercise any powers over the persons or property of any subject of this State, or to carry into execution any of the laws thereof on their own authorities, unlawful assemblies.”[7] Johnson’s decree hastened the dissolution of the club, but the network it had created in Baltimore survived.

William Goddard continued baiting the radicals of Baltimore in his newspaper, and in 1779 Nathaniel Ramsay, David Plunket, and Samuel Smith of Smallwood’s Regiment would all be involved in another attack by a mob on Goddard and his office. After taking his grievances to the Council of Safety, Melchior Keener managed to eventually return to Baltimore. By 1779 the political tensions appear to have blown over for Melchior Keener, who was back in Baltimore, and in 1779 he can be found in the records buying land on Charles Street.[8]

The Whig Club was one of the manifestations of a new order in Baltimore that presented a challenge to the state authorities in Annapolis, who formed the socioeconomic elite in Maryland. The Whig Club wielded popular violence and drew its members from both merchants and craftsmen– across professions, its members’ common bond was dedication to the Revolution. For many, especially the radicals in Baltimore, the Revolution had become more than a fight against the British; the steps Americans took during the conflict would determine who would govern the new country.

1 Response to The Whig Club: Judge and Jury in Baltimore