A Fine Fox Chase: The Battle of Princeton

At the beginning of 1777 the Americans were in an unfamiliar position; they were on the offensive. In the week after capturing Trenton they had successfully parried the attacks of General Cornwallis, but a more serious engagement was inevitable before the two forces made camp for the winter. The events of January, 1777 could sustain or destroy the momentum the Americans had won at Trenton.

The morning of January 3, 1777 was bright and frigid, “with a hoar frost which bespangled every object.”[1] The remnants of Smallwood’s regiment had been marching all night on the frozen mud towards Princeton. The veteran Marylanders no longer had the numbers to make up their own battalion. They had been combined with Virginian General Hugh Mercer’s men, along with Pennsylvania, New Jersey, and Delaware troops.

Plan of Princeton, Dec. 31, 1776, Image from Library of Congress Geography and Map Division.

The American force marching to Princeton was divided into two prongs; General Greene’s men were to distract the British by attacking from the main road into the town– the Marylanders were with this group. Meanwhile, General Sullivan would lead a larger division down a back road to mount the main attack. However, the Americans were discovered before they reached Princeton. British Lieutenant Colonel Charles Mawhood spotted Sullivan’s column on the elevated Saw Mill Road and mobilized his men to make an attack. That day Mawhood rode a brown pony, “and [had] a pair of springing spaniels playing before him.”[2] He did not realize that he could only see half of the American troops– General Mercer’s men, part of Greene’s force, were hidden by a ravine that lay between Mawhood and Sullivan. For his part, General Mercer did not realize Mawhood stood at the top of the ravine.

When word finally reached Mercer that a British detachment was marching towards them, he sent out a small group to climb the ravine. This band took a British light-horseman by surprise, and the startled soldier galloped away before the American riflemen could get him in their sights. First contact had been made at the Battle of Princeton. 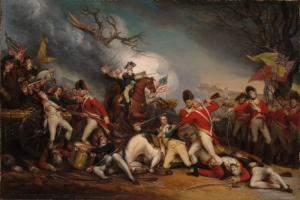 The Death of General Mercer at the Battle of Princeton painting by John Trumbull.

Mercer and Mawhood both raced to gain the advantage on high ground, and the two met at a fenced orchard.  They formed lines of battle and the Americans were the first to fire, aiming particularly for the British officers. The British returned each volley, and then they began to charge with their bayonets affixed. The Americans fell back in the face of the bayonets. General Mercer’s horse was shot, and he was on foot when he was overtaken by the British. The story of the death of General Mercer goes that although he was wounded he refused to surrender, fighting off the British with his sword; despite his courage he was bayoneted on the battlefield and died shortly afterward. The commander of the Delaware Regiment, John Haslet, was another casualty of the Battle of Princeton. After losing their leadership the men began to fall into a chaotic retreat, but by that point Washington had made it to the battlefield with reinforcements. The men rallied and broke the British line. The Americans pursued the defeated British troops as they made the retreat, and George Washington is said to have cried “It is a fine fox chase, my boys!”[3]

A number of British soldiers attempted a defense of Nassau Hall on the grounds of present-day Princeton University. Captain Alexander Hamilton fired a cannonball into the building and the troops within surrendered. By the end of the battle, the British had lost 450 men as the total killed, wounded, captured, and missing. [4] The American casualties were far lighter, but the majority of them came from General Mercer’s brigade, which included the Marylanders. [5]

The victory at Princeton cemented the Americans’ military ability and proved that the capture of Trenton had not been achieved by mere good fortune. The Americans had learned from their defeats during 1776, and by the dawn of 1777 they had become worthy opponents. However, the score would have to be left at that for a few months. Before the British and Americans could resume their contest they would have to establish winter camps.

1 Response to A Fine Fox Chase: The Battle of Princeton